One member, one vote up for discussion at the Lib Dem spring conference

Nestling quietly on p.29 of the Liberal Democrat Spring Conference booklet is this:

The Federal Executive are proposing that all members at conference should have a vote on policy motions, and that everyone should have a say on the committees that run our party. Come and share your opinions on our plans for One Member, One Vote.
Saturday 8th March 13.00–14.00
York Barbican, Auditorium 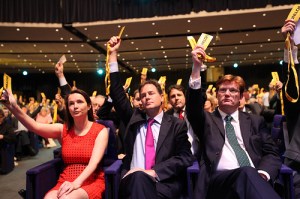 Currently anyone from a local party (who can afford the cost and time) can attend the party’s federal conferences, but they only get to have a vote if they are elected as one of their local party’s voting conference reps. Under the proposed change, all party members at conference would have the vote.

Likewise, for the party’s federal committees, the electorate is currently restricted to conference reps. Under the proposals, all party members would get a vote.

In the past, such all member ballots have often been opposed on the basis that only the most prominent party members (MPs, peers and very few others) have a chance of being known amongst the wider party membership. Therefore all member ballots would in effect have been very elitist, restricting the likely winners to a small number of people.

However, the rise of the internet has made it much easier for party members to be known more widely. Plus the increasing number of MPs and peers means simply being an MP or peer makes you much less well known than it used to. Moreover, the internet means campaigning in such contests would no longer be the preserve of the well-funded, as it was in the days when campaigning meant having to pay for large volumes of postage.

That makes the current debate rather different from the previous debates ten and more years ago as all member ballots would be a more open contest.

I suspect they also mean that whilst in the past proposals for such a switch never really got any significant support, this time round it is a very live debate – and so well worth participating in.