What can brands learn from the #nomakeupselfie campaign?

You may have noticed the sudden glut of people posting glowing, natural beauty type selfies to their Facebook, Twitter and Instagram pages. Okay, so you will have noticed this because it has been such a success that it’s now all over the news.

The #nomakeupselfie campaign is one of those rare beasts that started with regular social media users, rather than a brand or charity. Participants upload a selfie of themselves – make-up free – and encourage people to text ‘beat’ to donate £3 to Cancer Research UK.

The charity, which admitted that it wasn’t the creator of the campaign (but has given it its full support) has received more than £1 million from the 800,000+ text donations – and that was just in the first 24-hours.

Even men (gasp!) are getting involved, either by taking regular selfies, or posting pictures of themselves in full make-up.

Why is it so successful?

Celebrities use the #nomakeupselfie to display how amazing they look – even without layers of make-up, lighting crews and Photoshop. It also helps them to appear self-confident, ‘brave’, and girl next doorish. The #nomakeupselfie taps into the inner Narcissus of all of us, encouraging us to share our natural good looks with friends and followers. (I’m assuming, I think rightly, that most people would choose to post their best no make-up photo, rather than the 6am hungover/ road kill look.)

By nominating friends to be the next person to take a #nomakeupselfie, participants are including powerful calls to action in their posts. It’s not just, ‘like this photo if you hate cancer/share if you want to find a cure’ – which is one of the more useless posts that floats around Facebook.

As I said, there’s nothing new about the no make-up selfie. Now and then random people will pop-up in one of my social streams with a glorious make-up free picture of themselves and a small note about the lack of chemical gak on their faces (you may have gathered, I have strong views about make-up). Well, hurrah for you, we say. But most people won’t share it, because most won’t care.

Using #letsbeatcancer, #beatcancersooner and “txt beat to 70099 to donate £3”, attaches a worthy cause to the photo, and compels people to share it and donate.

What can brands learn from this?

Alas, no one can make something “go viral”. It either catches the zeitgeist, or it doesn’t. More often than not, it’s the mistakes, or ill-advised social media posts, that get the public’s attention.

For something to be shared by a huge number of social media users, it needs to be something that unites people in a particular emotion. Something that tells a story.

Luke Lewis from Buzzfeed said that its most popular articles were the funny, positive ones such as 27 Middle –Class Problems.

Unless you’re about to recruit hundreds of people in the local area, no one will care. That’s not to say this news isn’t a big step forward for your company, and that you shouldn’t be proud. But it would be like a regular social media user Tweeting: “The council has approved my kitchen extension! Pls RT!” – news of great importance to them, but not significant to anyone else. Give people a reason to care.

A recent non-brand example of this was the TwitPic of the Prime Minister. Although he was (apparently) in the middle of a serious conversation with the US President about the Ukraine crisis, it didn’t really serve a purpose…well, not the one it intended to serve.

I’ve been speaking to @BarackObama about the situation in Ukraine. We are united in condemnation of Russia’s actions. pic.twitter.com/7Rk2k8iOIK

“Talk to us about this latest crisis!”

We’ve seen past examples where brands get in wrong, and by trying to show that they care about an unfolding disaster, they just look cold hearted and cynical. Remember Bing?

How you can #SupportJapan – http://binged.it/fEh7iT. For every retweet, @bing will give $1 to Japan quake victims, up to $100K.

Some brands also have the tendency to want to jump on social media trending topics, and get involved in the conversation. 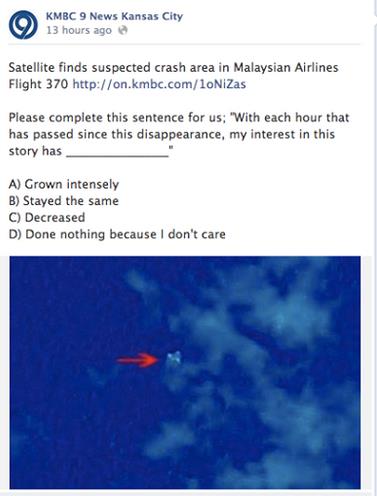 But these attempts can, and usually do, backfire. The #nomakeupselfie campaign works because it started with individuals who, collectively, have the sole motivation of raising money for cancer research.

Organisations don’t need to comment on everything that happens in the news. When they do, it often feels inappropriate.

By focusing on creating a vibrant online community, organisations can foster and harness the creativity of its members, encouraging and supporting them as they create content and maybe start trends of their own (for example, an Australian YouTube user started the Harlem Shake phenomenon.)

A brand social media campaign that focuses on how many likes and shares it can get just isn’t going to cut it. There needs to be a story behind the post, a reason it exists, if brands want to it to make a significant impact.

The post What can brands learn from the #nomakeupselfie campaign? appeared first on Carrot Communications.