People do what other nearby people do 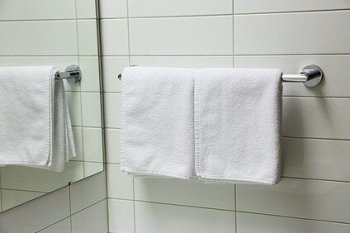 Your website probably has all sorts of things on it you want people to click on or do. You might want them to download something, sign up for your newsletter or press a “buy now” button. But how do you convince people to do these things?

The answer is strangely revealed in some new research about the use of towels in hotels.

In this study, researchers from the University of Luxembourg wanted to see if there was a way they could encourage people to use fewer towels in a bid to make the hotel more environmentally friendly.You will probably have seen notices in hotel rooms that say things like “If you wish to re-use this towel, please hang it up; if you want fresh towels, place towels in the bath”. However, it seems that such signs are not that encouraging – people notice them but still like fresh towels every day.

In the Luxembourg study, however, the researchers compared two different notices. One said “75% of people in this hotel re-use their towels” where the other said “75% of people who have stayed in this room re-use their towels”. Guests who stayed in the rooms with the room specific notice reused towels 40% more often, resulting a real drop in laundry bills for the hotel.

So what is the psychology of this? It is known as “provincial norming” – which basically means we tend to adopt the behaviours of the people closest to us, people who are in “our province”.

On your website this behavioural effect can be used to good impact. Instead of saying “you might also like these” when you refer people to another page, use your analytics data and say things like “64% of people who read this blog post, also went on to read this one”. Or on a sales page, something like “72% of people who bought this item also went on to buy this product too”.

In other words, rather than using generalised “people liked this”, be more specific to the actual page that people are on. This will lead to “provincial norming” kicking in and more people doing the things that you would like them to do.