Local shoppers are much more likely to buy from a mobile than from any other device. New research shows that when people are using the web to find a suitable supplier for their goods, the individuals using their mobile phone instead of a tablet or a PC are the ones most likely to make a purchase. 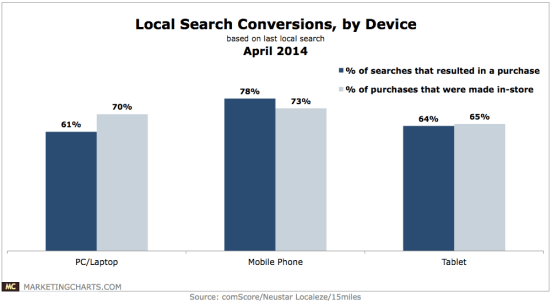 Interestingly, even though the desktop computer shoppers were less likely to buy than the mobile individuals, around the same number of people ended up buying in the store, rather than online. In other words, it doesn’t matter whether you have a mobile website or a desktop one, it seems that people still prefer to buy in the real world. That suggests we ought to be using websites to drive footfall into real world stores, rather than focusing on e-commerce alone.

The other interesting finding in this study of 3,000 people, was that tablets are the worst performers overall. In spite of the immense popularity of them, when it comes to getting people in to your store to buy something PCs and mobile phones win. This probably has something to do with the fact that the tablet is largely seen as an entertainment device, whereas mobile phones and PCs are more associated in our minds with being utilitarian.