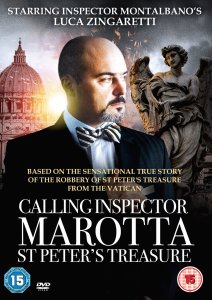 Calling Inspector Marotta: St Peter’s Treasure is a long (over 3 hours) subtitled Italian movie set in the 1920s which has secured more attention that you might expect with that combination thanks to the staring role for Luca Zingaretti, who also stars as Inspector Montalbano in the eponymous TV series.

This film is a detective thriller featuring the mob, a jewellery heist and a marriage in trouble – the sort of plot that features in oh so many American films, but this time it’s not modern New York but Rome and the 1920s. There are some nicely done subtle details about the rise of fascism dotted through the film (including a throwaway comment about the trains not – yet – running on time). That makes this film particularly attractive for anyone who gets a bit bored with yet another American setting for a crime thriller.

The different setting and the care taken over the period details makes the film an amiable watch, even if the tension only occasionally gets high and the characters don’t quite move the viewer as much as they should.

Got a view on this review? Then please rate it on Amazon.

Calling Inspector Marotta: St Peter's Treasure
An amiable crime thriller, especially enjoyable if you get bored with so many American settings
My rating (out of 5): 3.0
Mark Pack, 12 June 2014 | permalink