The Ashcroft marginal seat polls: both better and worse than the headlines say 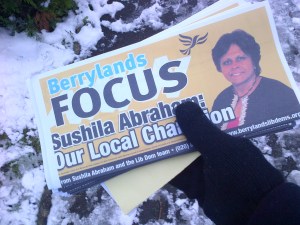 Michael Ashcroft’s recent polling across 17 Conservative-Lib Dem marginal seats, of which 11 are currently held by the Liberal Democrats, acted as a good personality test for Liberal Democrat activists.

You can split them into the doom-mongers (‘Aaaargh! We’re going to lose loads of them’) and the optimists (‘We’re in with a chance of winning enough to hold our own or even make net gains’).

The optimists have one methodological point in their favour. Overall, unlike Lord Oakeshott polls, Lord Ashcroft’s polls use a solid, consistent methodology. However, although the polling asked voters to think specifically about their own constituency and how they would vote there (rather than a general national voting question), the polling did not name the candidates from different parties. This usually depresses the figures for Liberal Democrat incumbents, so not only does Ashcroft’s polling show the party needing ‘only’ a 5% swing to come out with no net loss of seats, the real situation is better than that even allowing for Conservative incumbents likely being better off than the polling shows too.

The polling was also conducted at the height of the party’s post-European elections gloom. Whether that turns out to be the low point of the party’s polling fortunes remains to be seen but is also worth remembering.

So to the extent that the polling shows the party in with a chance of not losing seats, even possibly gaining them, it is promising for the party.

But in another respect the details of the polling is worse than the headlines. Put simply: across the marginal seats the Liberal Democrats are failing to out campaign the Tories.

The polling put the Liberal Democrats only ahead within the margin of error on the question of whether voters had heard from each party in the previous few weeks via their letterbox, doorstep, inbox or phone by 50% – 48% (and 50% is far too low anyway). For that possible optimism to be realised, the party will need to be consistently out-campaigning the Tories on the ground, not bouncing about just ahead on the margin of error.

Some seats did very well on this measure, with those with local elections in May notably doing better. Given that the public do forget some contacts, for Sutton & Cheam to be up at 74% recalling recent local contact from the Liberal Democrats and Cheadle up at 67% are particularly impressive results, especially as both are clearly ahead of the Conservatives in those seats. But across a batch of Conservative held marginals in south west England the Liberal Democrat figures are poor – 30% in Cambourne & Redruth, 30% in Truro & Falmouth and 35% in Newton Abbot.

Although the party’s membership is continuing to grow there is much work to be done to make the Liberal Democrat reputation for intensive local campaigning a reality across the marginal constituencies.