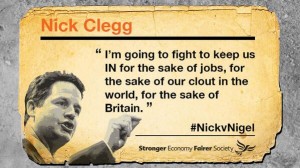 Usually you can tell what answers people will give to political polling questions pretty much just based on their voting intention. Do people like a government policy? Those who say they’re voting for the government most likely say yes, those who are voting for the main opposition say no.

The grip that people’s party preference has on their answers to other questions can be depressing at times (and there’s good evidence that the causation does run this way – from party choice to answers on other questions rather than vice versa).

It also makes questions to which there isn’t a ‘correct’ party answer all the more interesting. My favourite of these in recent times was a YouGov poll asking people how likely it is that nuclear war will break out. UKIP voters were much more pessimistic about the planet’s future – a finding that throws a useful light on the gloomy mindset about the modern world that fuels much of UKIP’s support.

For last week’s Clegg versus Farage European debate, it is no surprise that anti-Europeans (e.g. Conservative voters) thought the anti-European debate won and pro-Europeans (e.g. Liberal Democrat voters) thought the pro-Europe voter won. The ‘swing voters’ in this case were Labour voters, whose party is rather ambivalent about Europe these days and certainly sits between UKIP and the Lib Dems on the issue.

Ahead of the debate, YouGov found that Labour voters expected Farage to beat Clegg by 32% – 27%. However, when it came to it, Labour voters had Clegg as the winner by 51% – 42%.

That ability to exceed the expectations of Labour voters and impress them is particularly important for Nick Clegg given how much of the next general election is about the battle between Labour and the Liberal Democrats.