The Mystery of a Hansom Cab: mostly forgotten, for a reason 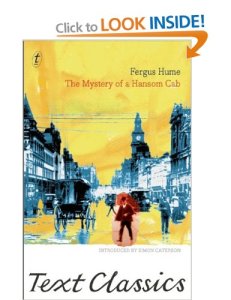 Despite having an occasional interest in late 19th century detective novels which extends beyond Sherlock Holmes, I had never heard of Fergus Hume’s The Mystery of a Hansom Cab until very recently. Which made discovering that it was the best-selling crime novel of the nineteenth century, and what’s more a book that as late as 1954 was listed by the Sunday Times as one of the best 100 crime novels of all time, all the more intriguing. How had the book slipped into such obscurity (though there was a 2012 Australian television version) – and was it still worth a read?

The answer to the latter is both yes and no, for the crime novel gets off to a great start with a murdered person discovered in a Hansom Cab in Melbourne. The initial investigation of the crime has much to keep the reader entertained. At times you can tell that the book was one of the first crime novels because as both readers and authors became more familiar with the genre, the clues became a little less obvious – and it’s easy to see why so many authors ended up using the combination of detective and sidekick when you see how Hume struggles at times when the scene calls out for a conversation between the detective and someone else instead of a rather laborious process of having one person thinking out loud.

About halfway through the plot sags considerably. The explanation of the murder looks pretty clear and the plot moves slowly, even if there is one little flurry of a possible twist to the plot near the end. The author’s writing style also rather starts to grate with oddities like a flurry of the use of ‘nonchalant’. The characters are also rather variable, and the female characters rather show up the book’s age with plenty of broad sexist statements about women. Several of them are, however, very much their own person and more than just adornments in the corner of scenes.

The book is meant to have helped inspire Sherlock Holmes amongst others, and in turn was inspired by the path-breaking detective Monsieur Lecoq, who also gets a reference in one of the Sherlock Holmes stories. Hume wrote a detective novel after asking his local bookshop what style of book sold best and finding out that it was the Lecoq stories.

I’d certainly recommend reading all the Holmes stories first, but if you have and are hungry for more similar fiction, this book has plenty of entertainment value as well as providing an interesting insight into the development of detective fiction.

One small production point to note: the audio version of the book is rather poorly done, with the end of each chapter done in a rush as if pauses are going out of fashion. The final sentence of each chapter runs into the next chapter’s title straight away, which rather diminishes some of the dramatic or poignant chapter endings. A couple of seconds of silence between each chapter would have hugely improved the audio version.

Of the printed versions, I would recommend the Text Classics edition for its handy introduction by Simon Caterson that helps set out the book’s context and history.

Got a view on this review? Then please rate it on Amazon.

Buy The Mystery of a Hansom Cab by Fergus Hume here.

The Mystery of a Hansom Cab by Fergus Hume
Mostly forgotten, for a reason – but still enjoyable
My rating (out of 5): 3.0
Mark Pack, 17 June 2014 | permalink